After 31/2 hours sleep I’m back up again to get the students who arrived last night breakfast. We tried to drop out when we found out that I was working late every night but in the end the organiser said he’d drop them off. When they announced suddenly that they were vegetarian we wished it had been cancelled especially as we’d done the food shopping.  The journey over to the drop off point is awful as there seems to be some issue on the A2 forcing all the traffic through Medway. It doesn’t help that there’s a broken down car in the Medway tunnel causing the traffic to filter into one lane. There’s a Police car behind it with its lights flashing, it’s only 200m from the end of the tunnel, logic would say that the Police car just towed it out of the way but this is 21st century Britain and logic is trumped by petty rules and regulations every time!

Working in London again so back on the train to get to one of my least favourite venues, Westminster Central Hall, by 11:30. We’re filming 10 breakout rooms and I’m extracting all the data from the cards, top and tailing the videos and exporting them to give to the client at the end of the conference on Friday. 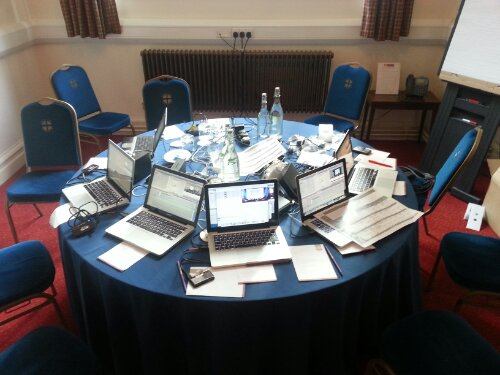 I’ve got 5 Macs on the go and I get finished at about 9pm leaving the computers to render out the videos overnight.  Just in case I leave a little notice to deter people fiddling or worse still trying to switch them off!

The April fools came courtesy of one of the in house techs who decided that he would help by transferring all the data from the camera card for the keynote session onto one of the macs. They’d set them up for me but told me that two of the drives were “read only” so while I was sorting out this issue he transferred the data and then went off and reformatted the disc. Unfortunately he hadn’t copied the card correctly. The main drive on the card is called contents and inside that is another called clips which is what he copied. However the contents folder and the files in it are required otherwise the files can’t be read. To say I wasn’t best pleased was an understatement!