University open day at Teeside university. It was a beautiful morning when we set off but after we’d had breakfast at McDonald’s in Bishop it became really foggy which made the journey quite stressful as the Sat Nav was playing up (I’m pretty sure that since I upgraded the firmware on my phone the mobile data has been playing up -I had problems with it all day). Eventually we got to Middlesbrough and found the uni and by this time the sun was back out.

Sarah and Lissi went off to the subject talk and Ben and I sat downstairs.  There was a funny moment when the lady behind reception came over and gave Ben some sweets.  She stood and talked to us and admired Ben’s Lego bag. As she walked away Ben looked over at me and raised his eyebrow in such a way that if he’d been afew years older would have said “I’m in there”!

After the talk we caught up with Sarah and Lissi and went on a tour of the forensic labs. There was a whole series of rooms that were done out as a bar, childs bedroom,  greasy spoon cafe etc that they could set up for the students to investigate.  Apparently they use real blood! We also saw the court room and the vehicle lab where they learn how to do car searches and forensics on vehicles.

Compared to the so called elite Russell group university we saw a few weeks ago this one shone – the day was well organised, the subject tutor sold the course and there were helpful students everywhere.  The girl who showed us round the accommodation was lovely and spent time talking to Ben while the others were looking at the student flats. Also, refreshingly,  they were showing off the cheaper accommodation and well as the more expensive en-suite ones. So often you struggle to see the cheaper rooms on these open days.

I think Lissi will apply here – the course really appealed to her, she liked the accommodation and more importantly there is a Primark and a McDonald’s within walking distance!  Seriously though I think she’ll be ok here as it’s quite a small campus university that won’t overwhelm her.

When we got back we found that the workmen were resurfacing the bit right across the end of our road which meant we couldn’t get in. Ben was dying for the loo and luckily the community centre was open so we went in there. When we came out we had to park the car on the new estate and walk round. As we walked through the play area all the kids suddenly went “heĺlo Ben!” – strange to think a few weeks ago he didn’t know anyone.

When I went back to get the car i again walked through the play area and one of the kids said “I like your t-shirt” and then as i drove round some other kids interacted with me. I thought to myself “I can’t go out here without something making me smile!” 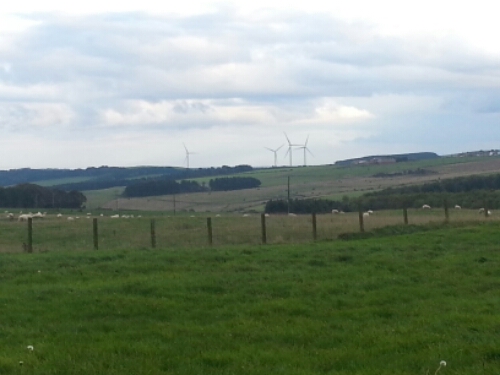